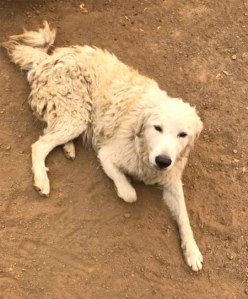 e you haven’t heard, Odin a working Great Pyrenees refused to abandon his eight goats during a recent California wildfire that swept quickly across his farm destroying almost everything in its path.  Odin’s human family along with a number of other dogs and cats were loaded onto a truck and left the dangerous fire.  Odin, however, being a traditionally stubborn and loyal Pyrenees refused to flee despite the danger.

Odin’s owner returned after the fire to find Odin, the eight goats and two baby deer also protected by Odin all safe and sound.  Brave Odin’s fur was singed, his whiskers melted and he was limping, but other than that he was ok!

You can see a short video of Odin the Hero along with his goats and sister Pyrenees named  Tessa.  Odin the Great Pyr   Odin is an inspiration to both humans and dogs everywhere!